Restitution of Looted Icon of St. John the Forerunner to the Church of Cyprus 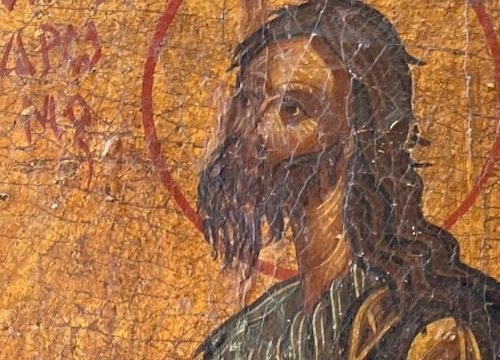 This event will mark the restitution of an 18th century icon of St. John the Forerunner – transferred from Cyprus to the United Kingdom (UK) in 1974 – to the representatives of the Archbishop Chrysostom.

The icon was illegally exported by a Royal Air Force officer who was serving on the island at the time. The son of the late officer thought it right to return the icon to its place of origin. The gentleman, who chose to remain anonymous, has no monetary or other claims but he conditioned that the icon returns to its lawful owner, namely the Church of Cyprus, and that nobody benefits financially from its repatriation.

For the icon’s restitution, the British gentleman sought advice from Marc-André Renold, Professor of Art and Cultural Heritage Law at the University of Geneva and holder of the UNESCO Chair in International Cultural Heritage Law. In turn, Professor Renold got in touch with the art historian, Maria Paphiti, known for her involvement in several cases of repatriating looted art from Cyprus, including the outstanding 6th century mosaic of St. Andrew from the Church of Panagia Kanakaria. Paphiti informed the Archbishop and coordinated the procedure for the icon’s return to Cyprus.

The icon will be handed over to the representative of Archbishop Chrysostom II on behalf of the officer’s son by Professor Renold.

About the Icon: St. John the Forerunner in the Wilderness

The icon is executed according to the Byzantine tradition. It shows the Saint, with disheveled hair and a beard, clad in animal skin and a himation, in three-quarter view, signing in benediction and displaying a scroll inscribed in uncial Greek with the verse of Matthew 4:17.  He gazes at the upper left corner where the blessing hand of Christ emerges from the open and radiant celestial segment. The foreground of the rocky landscape includes the severed head of the Saint in a platter.

The restitution of the icon will be followed by a cocktail reception.

Register here to attend the event at Villa Moynier. Places are limited and will be allocated on a first-come-first-served basis.

This event marked the restitution of an 18th century icon of St. John the Forerunner – transferred from Cyprus to the United Kingdom (UK) in 1974 – to the representatives of the Archbishop Chrysostom.