High Level Panel on the Policing of Assemblies and Human Rights: Freedom of Assembly, Prohibition of Torture and Right to Life 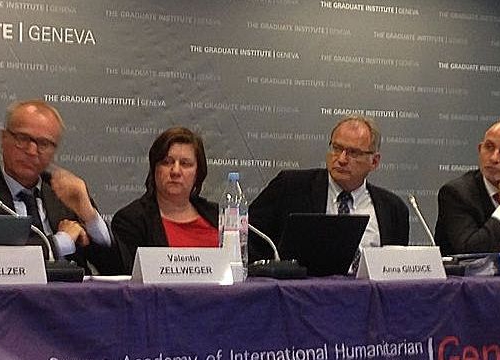 The High Level Panel on Policing of Assemblies and Human Rights held on 1 May 2017 discussed issues such as the human rights that are at stake during the policing of assemblies, the challenges posed by specific weapons and the role and potential of the revised Minnesota Protocol. It was co-organised by the Geneva Academy and the Institute for International and Comparative Law in Africa.

The panel was moderated by Ambassador Valentin Zellweger, Permanent Representative of Switzerland to the United Nations and the other international organizations in Geneva.

This high-level panel forms part of the annual expert seminars series on current challenges to human rights organized by the Geneva Academy and the Institute for International and Comparative Law in Africa. The 2017 Expert Seminar focuses on the rights affected by the use of force in law enforcement, in particular during the policing of assemblies.