The International Code of Conduct for Private Security Providers is the result of an active collaboration between members of the private security industry, the Geneva Academy, Swiss Department of Foreign Affairs and Geneva Centre for the Democratic Control of Armed Forces (DCAF).

It aims to promote respect for international law and standards among private service providers by clarifying international standards for the industry, and to improve their oversight and accountability.

The increased use of private security companies (PSCs) to provide security and military services poses significant challenges to existing oversight and accountability mechanisms. PSCs offer many services relevant to the protection of and respect for human rights (HR), be they military, security, contingency or intelligence services, to name a few.

The ‘Montreux Document on pertinent international legal obligations and good practices for States related to operations of private military and security companies during armed conflict’, finalized in September 2008, succeeded in establishing itself as a reference text with regard to PSCs. It has also encouraged members of the private contractor industry to reflect intensively on their role and the positive contribution they could make regarding respect for international humanitarian law (IHL) and HR standards.

Consequently, the industry embarked on a process to take standard-setting and oversight further by developing an International Code of Conduct (ICoC) for their services. To be effective, it was recognized that such an international industry standard should be based on IHL and international HR law, developed through an industry-driven multi-stakeholder process and overseen by an independent institution with sufficient means to hold those who violate the standards accountable.

This research project was carried out by Alice Priddy, Stuart Casey-Maslen and Scott Jerbi.

Academy Briefing No. 4, The International Code of Conduct for Private Security Service Providers (August 2013), presents a commentary on the ICoC provisions, analyzing each of the Code’s sections paragraph by paragraph and explaining how various provisions relate to existing rules of IHL and HR. It also cross-references the Articles of Association for the Code’s oversight mechanism. 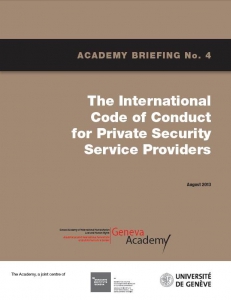 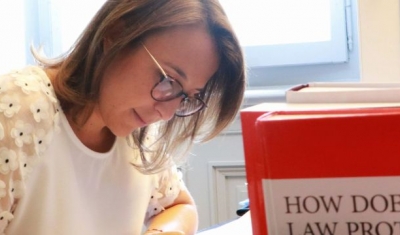 Émilie Max is one of our researchers. She tells us about her background, the research projects she works on and why she decided to work in this field. 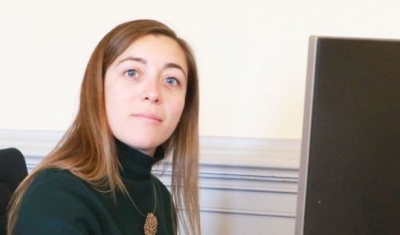 Dr Chiara Redaelli is one of our Research Fellows in international humanitarian law. She currently works on our Rule of Law in Armed Conflict (RULAC) project.