The Geneva Academy Team Wins the Prize for the Best Defence Memorandum at the 2017 Nuremberg Moot Court! 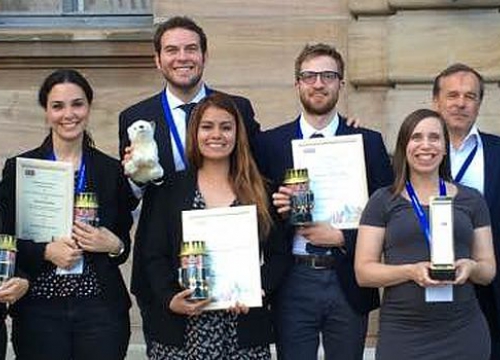 Congratulations to the Geneva Academy team – Tafadzwa Christmas, Elena Piasentin, Lina Rodriguez, Caroline Siewert and Thomas Van Poecke – for winning the Prize for the Best Defence Memorandum at the 2017 Nuremberg Moot Court! 33 teams coming from 26 countries participated in this important moot court, held in Nuremberg from 26 to 29 July 2017. In the elimination rounds, the Geneva Academy team reached the eighth-finals, after having ranked fourth overall in the preliminary rounds.

During the competition, the Geneva Academy team pleaded against teams from Kenya, Portugal and Armenia at the confirmation of charges hearing in the fictive ICC case against Mr. Naberrie, a suspected war criminal. Elena Piasentin, Lina Rodriguez and Thomas Van Poecke were in charge of pleading for the Prosecution, whilst Caroline Siewert and Tafadzwa Christmas pleaded when the Geneva Academy team had to impersonate the Defence side. ‘Our strong performance in the oral rounds, together with the overall win of the written part of the competition, made our participation to the Nuremberg Moot Court 2017 a success’ underlines Thomas Van Poecke.

The team was coached by Antonio Coco  and Tom Gal, Teaching Assistants at the Geneva Academy and PhD candidates at the Law Faculty of the University of Geneva.

The team is made of students from our LLM in International Humanitarian Law and Human Rights (LLM)  and our Master of Advanced Studies in Transitional Justice, Human Rights and the Rule of Law (MTJ ). For the first time, students from two different Geneva Academy programmes had a chance to work together as a team, a highly enriching experience. ‘It was a wonderful experience of personal and academic growth. We were a very diverse team, where each one of us gave a substantial contribution with his/her strengths, and received support when working on his/her weaknesses’ stresses Elena Piasentin, who was named Best Speaker for two of the three instances in which the Geneva Academy team pleaded.

About the Nuremberg Moot Court

Participation in this leading moot court forms an integral part of the LLM and MTJ curriculums.