This project conducted legal research into modern forms of piracy and the international community’s response to it, through naval patrols and the use of private security personnel.

On 30 January–1 February 2012 the Geneva Academy and Geneva Centre for the Democratic Control of Armed Forces (DCAF) held a Wilton Park conference on the issue. The conference brought together more than 40 experts to discuss whether an adequate normative and policy framework exists to regulate the conduct of states and private security service providers when they act to prevent piracy. The conference focused on legal issues, with particular reference to the situation off the coast of Somalia.

This research project was carried out by Stuart Casey-Maslen and Alice Priddy.

Academy Briefing No. 1, Counterpiracy under International Law (September 2012), describes the international legal framework applying to counterpiracy, including the law of the sea, the use of force at sea, relevant international human rights law and its application to states, private security companies and suspected pirates.

As part of this research project, the Geneva Academy also contributed actively to the standard on maritime security of the American Society for Industrial Security (ASIS International), helping to ensure that the standard is compliant with international human rights law. The American National Standards Institute (ANSI) has approved the Quality Assurance and Security Management for Private Security Companies Operating at Sea standard as an American National Standard. 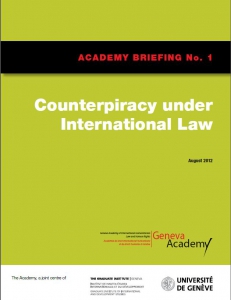